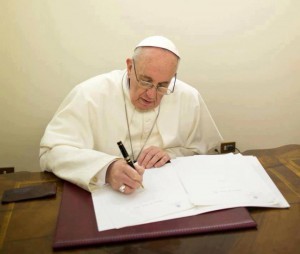 Here are some answers to questions people who aren’t Catholic—like me—may have about the encyclical Laudato si’:

What is an encyclical?

The term encyclical (from the Greek egkyklios, kyklos meaning a circle) refers to a circular letter, that is, a letter that gets circulated to a particular group. A papal encyclical is a letter written by the Pope to a particular audience of patriarchs, primates, archbishops, and bishops of the Catholic Church. Sometimes encyclicals are written to an even narrower group (e.g., the bishops of a particular country) but they normally tend to be for a broader audience. Encyclicals addressed to the bishops of the world are generally concerned with matters which affect the welfare of the Church at large.

What do encyclicals do?

As the Catholic Encyclopedia explains, encyclicals condemn some prevalent form of error, point out dangers which threaten faith or morals, exhort the faithful to constancy, or prescribe remedies for evils foreseen or already existent.

Why is the encyclical called Laudato si’?

The title Laudato si’ is a quotation from the religious song Canticle of the Sun. St. Francis of Assisi, the patron saint of the environment, is said to have written the song that praises God for the creation of the different creatures and aspects of the Earth. The phrase “laudato si” occurs several times in the Latin version of the prayer-song.

The encyclical is also expected to be given the Italian subtitle: “Sulla cura della casa comune,” (On the care of the common home).

Does the pope actually write the encyclical?

As with most documents by world leaders, Pope Francis has a staff that helps him to compose the letter. The first draft was prepared by the Pontifical Council for Justice and Peace. Other church leaders also contributed to the draft. The document was also repeatedly revised and reviewed by the Vatican’s Secretariat of State (and the Congregation for the Doctrine of the Faith).

Is this encyclical considered infallible?

No, it’s not likely to be declared infallible. To meet that standard the letter would have to meet three criteria: 1) the subject is a matter of faith or morals, 2) the pope must be teaching as supreme pastor, and 3) the pope must indicate that the teaching is infallible. No pope since 1870 has designated an encyclical to be infallible.

Are encyclicals considered binding if they are not infallible? 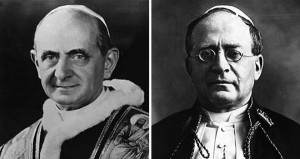 The following comes from a June 11 Crisis Magazine article by Dale Ahlquist:

It is interesting now to look back at the various reactions when the pope issued his encyclical on contraception. I dug up the following, and I think they pretty much speak for themselves. It is hardly necessary to add any comments at all except to say how little things have changed.

A leader from an association of Protestant mainline denominations called it “the most important encyclical ever promulgated in the entire history of the papal succession.” He said, “I am glad that this pronouncement is so thoroughly clear-cut and uncompromising.” He was glad that everyone had to be either for it or against it. There was no middle ground.

And why did that make him glad?

“It will mark a new era in wide and deep-going revolt against ecclesiastical control. It will bring … nearer a revolt within the Roman Catholic Church.” He said this attempt by the Church, with its “autocratic domination” to interfere with the private and intimate matters will push it closer to its own inevitable collapse. This exercise of “hierarchical power” would certainly be met with “indignant repudiation” by Catholics themselves.

In other words, he was glad that the Catholic Church made its position clear, so that Protestants and everyone else could clearly reject it. No middle ground. And he predicted Catholics would reject it, too.

A leading feminist said the Church had set itself “squarely against progress.” She said the message of the encyclical was: “Go ahead and have a child every year, never mind if you are too poor to give them a decent home; never mind if they will be born sick or feeble-minded; never mind if they will be born deformed. Birth control under any and all circumstances is a horrible crime.” She said the pope’s denunciation of contraception would lead to more poverty and more disease. She praised the Protestant and Jewish congregations that had already officially endorsed contraception.

A doctor said the document was “confusing,” especially when it came to the issue of the health and welfare of the mother. He disagreed with the encyclical that claimed contraception violates nature. And he observed that the declining birth-rate among Catholics indicated that the rule was “being more observed in the breach.”

A spokesman for an atheist organization said that the document was evidence of the Church’s failure to recognize that morals change.

A pastor of a non-denominational church in New York said the encyclical was an example of “a tenth-century mind at work on twentieth-century problems. We are never going to get anywhere with marriage or anything else by going back to St. Augustine. The pope’s interpretation of marriage is pure mythology … his denunciation of birth control is bigotry.”

Comment:
As Father Frank Pavone says on his website: “America Will Not Reject Abortion Until America Sees Abortion.” I commend CalCatholic for publishing his graphic photo of the baby girl murdered by abortionist Gordon Goei. This baby is just one of over 16,000 apparently dumped as waste material. I look forward to CalCatholic’s series on this most horrible collection of murdered infants. How many more abortions will our erstwhile Christian nation allow before God’s wrath can no longer be contained?