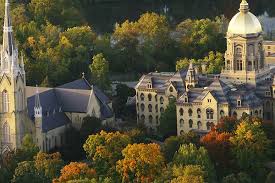 Notre Dame is complying with the abortifacient/contraceptive mandate in renewing its student health insurance program for 2014-15. Aetna, the insurer, will now provide students with free abortifacients and contraceptives.  Moreover, the university will itself enroll all otherwise uninsured graduate and foreign students in the plan.  Notre Dame has declared in court that to do what it is doing now would be scandalous.  And it is doing this voluntarily. It could have dropped the program or switched to a self-insured program free of the mandate.

Read about it in our Special Bulletin-Contraception Mandate

“[T]he mandate would require Notre Dame to commit scandal, which…is particularly grave when associated with those ‘who by nature or office are obliged to teach and educate others’ Catechism of the Catholic Church 2285.”
– Notre Dame district court complaint

….Under the Affordable Care Act (“Obamacare”), Notre Dame is required to provide health insurance to its employees, and under the contraception mandate that insurance must include provision for free abortifacients, contraceptives, and sterilization.

Under the so-called “accommodation” for objecting religious organizations such as Notre Dame, the insurer (or plan administrator in the case of self-insured plans) rather than the organization provides these benefits.

Schools, on the other hand, are not required to offer a health insurance plan to students; but if they do, the school must comply with the contraceptive mandate.

Notre Dame included both employee and student plans in its lawsuit against the mandate. It maintained that under the “accommodation” it would be “facilitating” the provision of abortifacients and contraceptives by its insurer (for students) and plan administrator (for employees); that this would violate its “sincerely held religious beliefs”; and that the regulation was therefore invalid under both the controlling statute and the Constitution.

Almost alone among the scores of religious organizations who have sued, Notre Dame has been denied relief by both the trial and appellate courts while the case is being tried. The trial has been postponed while Notre Dame is considering whether to seek review in the Supreme Court.

In the meantime, Notre Dame decided to comply with the mandate as to employees. Accordingly, Notre Dame employees are now receiving free abortifaciacients and contraceptives from the third party administrator of the plan.

The university did not have to decide about students until the expiration of the 2013-14 plan on August 14.

Notre Dame could have avoided the mandate either by dropping the insurance plan altogether or by self-insuring. The Association of Catholic Colleges and Universities has told us that some Catholic schools have taken one course, some the other, and that, since many other plans are on the same August renewal schedule as Notre Dame, more may do so now. Ave Maria and the Franciscan University in Steubenville, for example, dropped their plans some time ago.

There do not appear to be major obstacles to this course. Whereas the employee plan is a significant part of compensation, students are responsible for their own health costs and pay the entire premium. Even if the group plan rates are in some cases lower than those available under individual policies, Notre Dame surely has the resources to take any additional cost into account in awarding financial aid.

But the wonderfully appealing consideration is that dropping the plan would turn Obamacare on itself because under Obamacare students may (1) remain on their parents’ plans until age 26 and (2) take advantage of the premium subsidies.

With the low income of typical graduate students, the subsidies would have a major impact. For example, in terms of orders of magnitude rather than precise calculations, the monthly cost for an individual with an annual income of $17,235 would be $57 with the subsidy as against $193 under the Notre Dame plan.

If the university wished nonetheless to continue a student plan, it could simply have converted its insured plan into a self-insured plan.

For reasons both complex and immaterial, in contrast to self-insured employee plans, self-insured student plans are not subject to the mandate. (See American College Health Association, Association of Catholic Colleges and Universities and the administration.) Some 200,000 students were enrolled in self-insured plans and some 800,000 in insured plans last year.

Presumably the switch would not be administratively demanding, for the administrator of Notre Dame’s employee plan, Meritain, is a subsidiary of Aetna, the insurer of the student plan.

But we have just learned, after considerable difficulty, that Notre Dame has not elected either of these courses. Instead, it is offering the insured program for the coming academic year, and accordingly Aetna will provide free abortifacients and contraceptives to student enrollees.

Nor did the university stop with simply offering the plan. It is forcing graduate and foreign students into it unless they prove they have other plans satisfactory to Notre Dame….

To read more from the Sycamore Trust about Notre Dame’s secularization, click here.

Our Lady of Guadalupe school hands out meals in East L.A.

Comment:
This is great news! This is one of the things the Church should be doing during this difficult time. And, notice, they handed out food. They didn’t even throw it from six feet away or tell them to go online for a virtual meal.