Liturgy of Lament held at St. Dorothy’s Church in Glendora

Joe approached the microphone, held his handwritten index cards out in front of him, and took in a deep breath.

He exhaled with grace.

That is how he concluded an eight-minute witness talk, with several pauses and tears, during an impactful element of a two-hour Victim Survivor Listening Session at St. Dorothy’s Church in Glendora on Thursday, April 4. But it will likely mark the beginning of Joe’s further public healing process that he wants to continue. 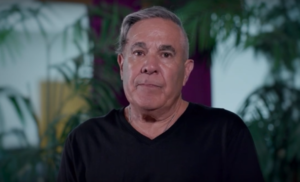 In his first public talk about what happened in his life, Joe stood before some 40 strangers — parishioners, parents, and teachers at the school from the Safeguarding Children committee — and explained how he had been an altar boy raped by two priests as a 12-year old.

He battled depression and anxiety and wanted to get off medications, but his doctor told him “he would be damaged for life” because of the abuse.

He had deep conflicts about why he held that information inside for 48 years — mostly to protect his parents from the burden and fear, their status in the community, and the chance they would lose their faith. Joe had two failed suicide attempts.

After the doctor visit, he said he finally went to his parish and was put in contact with Dr. Heather Banis at the Victims Assistance Ministry Office of the archdiocese.

“My anger and guilt are gone, and I blamed myself for too long,” Joe said. “I pray to our Lord: What’s next in my journey? I want to be a voice and advocate for those unheard voices in the Catholic Church. Everyone deserves therapy. The Catholic Church needs to reach out, through the pulpit, bulletins, newspapers, and even Facebook, to show it cares for unheard victims.”

The first 10 minutes of the gathering was framed as a “Liturgy of Lament,” with Scripture, song, a litany of repentance, and a lighting of candles that led into a call for God’s blessing. 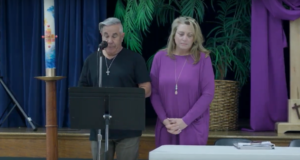 The last hour-plus was devoted to Banis, a clinical psychologist, who explained the purpose of her office, which was established in 2002. The goal from the start has been to guide people like Joe through the trauma of their incidents.

Banis said that what Joe did “was something truly extraordinary” in talking to the group.

“He was living a life full and rich with family and work and friends, but he didn’t have his Church. He took a huge risk by calling me, a complete stranger working in the Church. We can’t make the Victim Assistance Ministry the best-kept secret in the whole archdiocese. It’s growing and evolving because of people like Joe.”

Before the event, Joe talked to Angelus News for nearly a half hour. He explained how he has met Archbishop José H. Gomez to show him a letter he wrote to Pope Francis, and feeling he was being heard. Joe also talked about how as a schoolteacher, he has always been about protecting children.

Joe also revealed he has visited his perpetrator, now in hospice care.

“I’ll never forget,” Joe added. “But to heal, I have to forgive. Forgiveness is still a big deal for me.”

He said at one point they held hands and recited the Lord’s Prayer.

“I cried, he cried,” said Joe. “I got to confront him — most never get that chance. He eventually said to me: ‘I have hurt you, haven’t I?’ In the end, I do feel sorry for him. He was also molested. He was jailed and his job taken away from him. In a way, I’m helping to heal him, too. Maybe God will forgive his actions. He can’t hurt me or anyone anymore.”

In thanking St. Dorothy’s for inviting him to come to this safe space with Banis, Joe concluded that if this meeting took place at his parish 10 years ago, he might have stood up and asked for help. But he also said he knows if he came out with this story back in the 1970s, “no one would have believed me.”

Comment:
This is absolutely ridiculous and, as noted, totalitarian. I worked for years with youth fire setters. (We used to call them “juvenile fire setters,” but we were told not to use “juvenile,” since it was associated with “delinquent!” I said we could simply explain that juveniles were young people who were minors, but political correctness carried the day.). Some people really are “at risk.” The problem is often more with the adults than the young people with whom we work. “Words matter,” yes! Then why attempt to make them mean something else? As a cancer survivor, I guess I’m “at promise” of a recurrence. Smokers are at promise of developing lung cancer. And, let’s all avoid mortal sin or we’re at promise of hell. It seems popular American English is “at promise” of meaninglessness. I’m glad I recently retired from the Fire service, so I’m no longer “at promise” of doing something illegal by stating something honestly and truthfully.