This story comes from an October 6 Guiding Star blog post by Leah Jacobson.

It is becoming increasingly clearer with time and research that the magic birth control Pill sold to women as the answer to all sexual inequity is merely a cancer causing, stroke starting, problem masking, and fertility decreasing mess of a “medication”. It hasn’t helped women become any more self actualized and in reality has created a strange dissonance for many modern women about how to handle and accept the natural functions of their healthy bodies.

Many women are slowly waking up and deciding that they’d rather plan their pregnancies naturally and work with their bodies instead of suppressing them. There is a slow, but steady growth of women who are insisting on following their cycles of natural fertility and using the signposts of fertility to plan their sexual encounters. That’s great, but what about the men?
The adoption of the Pill as a women’s issue placed family planning squarely into the hands of women and men were granted a pass on fertility awareness.
Men no longer had any obligation to pay attention to or honor the natural fertility of their female partner because, well, that was a woman’s issue. With the protections of birth control and abortion on demand to keep them free from all responsibilities that the consequences of their actions would naturally bring, certain men feel free to openly use women’s bodies.

These men are the result of the expectation for women to suppress their fertility. They are weak, indulgent, self-centered, and entitled. And sadly there are so many of these guys walking around now that many women don’t even know that there is a different breed; a different class of men that exists. Real MEN.

Men that are capable of learning about signposts of female fertility; things like cervical mucus, basal body temperatures, breast tenderness, etc. Men that can apply these signs to their decision making process concerning sex.
These men respect that women come with the gift of fertility. Yes, the gift. Not the burden. You see, real men can see that women are incredibly built to handle the stress and strain of carrying a new life into this world. They see female fertility as an attribute and something to be fearfully respected. They may still fear the amazing power of female fertility, but they never run from their fears. They face it head on and use their own strengths to work with their partner. And when they do they often find that the women in their lives end up feeling cherished and honored instead of manipulated and used. They experience rates of divorce that are almost unheard of and still enjoy the efficacy rate of the Pill in avoiding pregnancy. 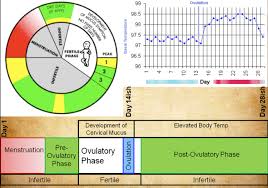 I have been so lucky to meet many of these men. They are not as rare as most would make you believe, but they do sometimes need encouragement to develop into the men they are capable of being. They have not been told how great they can be and have been told by society that things like caring about women’s health is not their business.
So men, please do not fall for the lies that you are obsolete in the fertility discussions. Get in there and show women you are capable of being a MAN. Offer to chart her temperature every morning. Put the stickers on her chart. When you step up and honor women the way we were naturally created there is going to be a culture shift that takes place. Men and women will actually stop seeing each other as the enemy and see the contributions of one another as valuable and necessary. Women won’t feel a need to put men in their place by doing everything men can do because you will have already admitted that there is nothing greater than our ability to bear new life. You respecting us the way we naturally are will truly change the world. Because that is what real men do best.