Police in Santa Rosa on Friday arrested a suspect in connection with an arson incident that occurred at a church on Thursday.

Yovan David Ayon, 34, of Santa Rosa, was arrested on suspicion of felony arson and violation of probation, according to police.

Firefighters with the Santa Rosa Fire Department responded Thursday at 3:35 p.m. to a report of a fire inside the Saint Rose Catholic
Church at 398 10th St., police said. 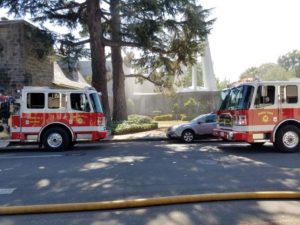 Firefighters located four separate fires all in or around the altar of the modern wing of the church and were able to quickly extinguish the fires.

There was no structural damage due to the fire, but several decorative altarpieces were destroyed in the incident, police said.

Investigators ruled the cause of the fire as arson, and Santa Rosa Police Department Property Crimes detectives were called to the scene to help investigate the incident.

On Friday, detectives followed up on a credible lead that led to the probation search of a residence located a few blocks from the church.

Police said evidence related to the arson was located inside the residence, and the resident, identified as Ayon, was taken into custody and arrested in connection with the incident.